skip to main | skip to sidebar

Has it really been a year?!

I ran on Memorial Day, which was 5 days ago. I can't recall when I last run; I hope it was not when I last posted on this blog, which was exactly one year before this Memorial Day. But who knows. I started a freelance gig in June of last year, and they took up some weekend time. Regardless, I am 100% sure I did not run in the fall, because I got a new phone in October, and I had not taken out the headphones until I ran this past Monday. In fact, I could not even hear out of the headphones, so maybe they don't even work. Or maybe it is just user error.

I do, at times, jog for anywhere from 30 seconds to a few minutes with Bailey, but Monday was my first real run. And I am happy to say it went well. I did about 2 miles and I only stopped when Bai did her business. I did have mt music playing; it was just pumping out of my phone.

I hope to get out on Sunday, but since I am singing in the morning and have choir practice tomorrow night, it is not looking very likely. I could not bring myself to run this morning because I washed my hair late last night, after coming home from Kennywood; I can't see washing it 10 hours later, when I spend so much money for color.

Excuses, excuses. But hopefully I won't have too many more of those.

Back in the game

After many months, I finally got in a good run.
Since the winter, I had stopped running. Over the past couple of months, however, I would run for a couple of minutes at a time once or twice during my walks with Bailey. Most days I just fast-walked with Bailey. But on days I had extra energy or when it seemed like Bailey just wanted to run, I figured I might as well move a little. Fortunately, it was enough to keep me in decent running shape.
The temps and the humidity had gotten high the last week. Finally, this afternoon, a storm came through, and the temps went down in the lower 70s. It was great. So off B and I went. It was uneventful. We stopped briefly twice so she could do her business. We did 2 miles (our long weekend route). And then I dropped her off and ran one more mile. I felt pretty good, other than a little bit of ankle pain, which I had been having during some walks.
With summer upon us, I doubt I will go back to regular running, but it's good to know I can still do it, especially after a 2.5 mile walk this morning.
at 8:19 PM No comments:

Running the cough right out me!

I was doing well right around Christmas with my long walks and a couple of runs. But, alas, a couple days after Christmas, I got sick. I started off feeling tired and achy, and within a day I started coughing and pretty much have not stopped since, although as the days and weeks go on, I cough less and less. Mostly. Walking in the cold makes it worse.

Today, the temps reached the low 60s. It was glorious. After some pretty cold days this past week and a snowy last Saturday, I figured I should put on the running shoes and go. So I did.

Bailey and I ran about 2 miles (our long walk route). I stopped for about 15 seconds two times so Bailey could do her thing, and I needed to walk for about 5 to 10 second so I could catch my breath going up a hill. But for the most part, it was all good. I am not sure I ever felt any pain, other than my usual breathlessness when I run up the big hills.

In fact, I felt so good about the run that I decided to drop Bailey off and run our usual 1.2-mile route myself. During that run, I had to walk up the biggest hill for under 10 seconds. I was fine the rest of the way.

Since this is January, and it will inevitable get cold again, I am guessing I won't be running again anytime soon. But it was nice to get one in, after such a long break. I guess the daily walking has kept me in pretty good shape.

Not surprising to me, I pretty much fell off the running wagon after Thanksgiving. My choir sang for Lessons and Carols, which called for a Sunday night practice on the 6th, and the actual Lessons and Carols the following Sunday. Then I went to a musical the Sunday after that (six days ago). Throw in the shorter days, and my usual Sunday late afternoon/early evening runs were thwarted.

Last weekend, or maybe the weekend before, however, I managed to run for a few minutes here and there during a longer weekend Bailey walk, but still not much of a run. But starting this past Wednesday, the 23rd, we got out early to begin our holiday break, and my running commenced. That mid-afternoon run came on the heels of my eating a giant plate of nachos and drinking a beer not even two hours prior, but I manged to run about 2 miles. The next day, Bailey seemed to want to run some more, so I managed to get in another run, though I did not run the entire time. On Christmas morning, I had no intention of running for a third consecutive day, but, again, Bailey was motoring, and I felt pretty good, so I ran for at least half of the trek. During those three days, the temps were in the 60s, and I was running with a Santa hat, so I was definitely not comfortable. Who would think you would be sweating in long pants and a long-sleeve t-shirt at the end of December? But I got through it.

This morning, I had planned to just walk, but once we got to the top of the long street, I decided just to run down the hill and up most of it. I took a break or two, so I probably ended up running about a mile or maybe less, but still a run. Today was the coolest day; it was probably around 50 degrees, and without the Santa hat, I was finally comfortable.

I am off for another week, so other than when I will be away overnight on Monday, I should be continuing the longer (2 mile) walks with Bailey. And I will probably manage to run a bit during a few of them. But if not, that will be just fine by me.
at 8:02 PM No comments:

So I did not run this past Sunday, but I did get a run in on Thanksgiving morning. Bai and I did about 3 miles, probably a little less. I am certain our first mile was a 10-minute mile or less, going Bailey speed. In fact, the first few tenths of a mile were practically a sprint. The second mile was at a more reasonable pace, and the last mile was almost slow; at times I had to get Bai to pick up the pace.

I don't recall any great pains. It was tough when we went fast or up a steep hill. But all in all, it was good.

Probably won't run again tomorrow night, but that's okay. Just glad I got that run in plus daily walks.
at 7:12 PM No comments:

Continuing the streak (which will probably be broken this weekend)

Bai and I ran for about 30 minutes on Sunday, once again. It might have been longer. In fact, I might have run with her for about 20 to 25 minutes and then went back out. Yeah, that seems right. This is why I need to write down what I do soon after I do it.

There was nothing remarkable about the run. But it happened, and that is what counts.

I have a super busy weekend ahead, so I am guessing my streak will be broken. What can you do.
at 5:02 PM No comments:

A complete run with the dog

Yesterday I decided that since Bailey's weekday walks are getting shorter, I should really try to wear her out on Sunday (after we took a long walk Saturday). So Bail ran with me for my entire run yesterday.

As usual, she started off full force, which is too fast for me. I tried to keep up, to get the heart going, and I was kind of glad she slowed down up the hill at the end of our first part of the run. We kept the same pace as we continued up the hill and then down another hill, and we continued to keep the same pace along that long street we sometimes walk on. Bail did stop to do her business a second time on that street, which coincided with my hearing cheering from a house. So I pulled up ESPN on my phone, and determined the Steelers were driving for the go-ahead score in the last few seconds of the game. I tried to wait that out, but after about a minute or so, I decided to keep going, and just try to watch my phone as I ran (which I don't recommend). Fortunately the Steelers prevailed, and I did not hurt myself trying to determine that!

Our run continued to go pretty well until Bai decided she wanted to run up the steep hill at the end of the street, which I really can't do, so I tried to reign her in. We kept going on the main street, then up our street, and after I tossed her business into our driveway, we kept going to the end of our street and into the field. We ran a few laps there, and eventually ran a few more times up and down our street.

When I had hit 35-38 minutes (I wish I could remember), I decided that was pretty good. Even with our couple of stops, I figure we ran 3 miles. And it was nice not to worry about timing.

I felt good pretty much the entire time (except when Bailey was running really fast). I recall getting a slight hamstring or butt pain, but that was it, and it did not last long. I really could have kept running, but I know the family was waiting for me for dinner, and I still had to lift some free weights and shower. 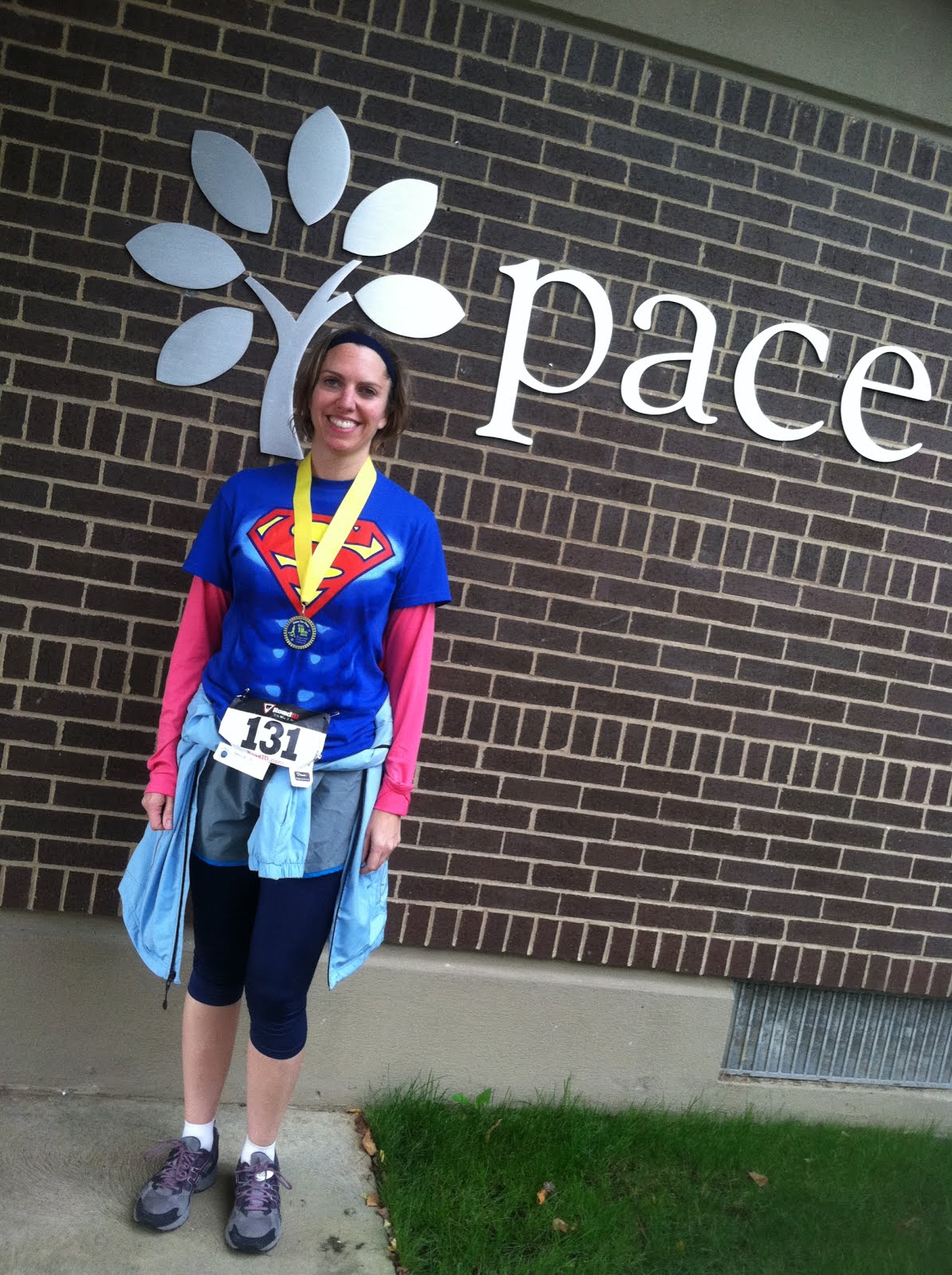 My name is Faith, and I have been running off and on since I was in high school in the mid to late '80s. I ran quite a bit at the beginning of this century; then I pretty much abandoned it. I returned to running in the fall of 2009 and decided to write about my past experiences as well as some more recent ones.

Since I live in Pittsburgh, I decided to call this blog "Running Around the Burgh" although what I do is really jog. And I typically run in the suburbs (or in another county altogether), but the Burgh is a state of mind as much as a place.